Beneath our universe—beneath the quantifiable matter, the light and energy we can detect, the forces of gravity and electromagnetism that define the physical universe as we know it—lies a chaotic network of dark energy. Few know or even suspect its existence, but for those who have discovered it, everything is different. These select few know the Strange (as it is often called) hosts numberless recursions, unique but limited worlds with their own laws of reality.

You are quickened—you are one of the few on Earth aware of the Strange and even able to access the alternate realities that lie in Earth’s shoals. You know these worlds are often governed by rules of physics, science, or even magic that are different that our own. You know they often hold riches—not just gold or jewels, but powerful artifacts that can bend reality back on Earth. And that they contain dangers unlike anything back home. Each recursion is a place of wonder, but each risks drawing the attention of vast entities that scuttle through the primordial reaches of the Strange like bloated spiders on a web: voracious planetovores that eat worlds—recursions and primes alike. 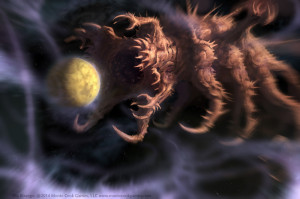 One prominent recursion, Ardeyn, is a world of extravagant sorcery, mystic blades sheathed in living souls, and an evil god called Lotanthe Sinner whose prison is the world. Once, Ardeyn was guarded from Lotan the Sinner by the Maker, his Seven Incarnations, and their angelic qephilim servants. But when they fell long ago, they left Ardeyn open to attack. Now mortals (humans and fallen qephilim alike) have taken up the fight to protect the place known as the Land of the Curse. Dragons, soulshorn, homunculiof the Betrayer, invaders from alternate recursions, demons of Lotan, and other insidious threats that hide in ancient qephilim ruinsare ever-present in Ardeyn. And at Ardeyn’s core, Lotan burns.

Another recursion, called Ruk, has hidden in Earth’s shadow since before humanity evolved, peopled by creatures that were never human. In Ruk, the walls of the world are a literal fact, visible as massive spars that pierce, protect, and sometimes lie shattered across the landscape. Outside the relative safety of the capital Harmonious, threats abound in the form of spore worms, venom troopers, free-roaming constructs from the Qinod Singularity, and glial storms. Ruk is a land of amazing technology, miracles of biological enhancement, and feuds that have burned since before the birth of mankind. And now that passageways have been opened into Earth, those feuds threaten to reshape the future of humanity. 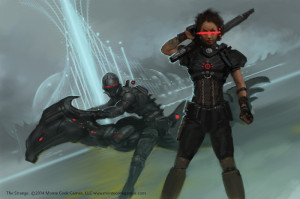 Those are just a couple of the hundreds of recursions that speckle the dark energy web around Earth. And of course in the chaosphere of the Strange itself, there are no rules—force of will is all.

The setting of The Strange follows Numenera’s lead, which means that along with a mix of big ideas, plots, and interesting NPCs and details, Monte and Bruce also provide you with tips from 70 years of combined GMing experience to help you make the most of the setting for your game, while ensuring you have all the guidance you need to create fantastic experiences for your players.